Fluctuations in regulatory risk impact the financial performance of utilities

At any given time, there may be broad industry issues or macroeconomic trends, as well as state-specific developments that may positively or negatively impact the financial performance of utilities. How regulators and policymakers address these challenges will affect the relative level of risk associated with ownership of the securities of utilities operating in a given state-level jurisdiction.

As part of its ongoing research, Regulatory Research Associates, a group of S&P Global Market Intelligence, assesses the regulatory climate for energy utilities in each of the jurisdictions in all 50 states and the District of Columbia, a total of 53 jurisdictions, on an ongoing basis. based. Each assessment is based on consideration of the many factors affecting the regulatory process, including the governor’s involvement, legislation and court activity, and specific actions of the commission.

An above average designation indicates that, according to the RRA, the regulatory climate in the jurisdiction is relatively more constructive than average, which represents a lower risk for investors who hold or plan to acquire the securities issued by the public utilities. operating in that jurisdiction. At the other end of the spectrum, a below-average ranking would indicate a less constructive or riskier regulatory climate from an investor’s perspective.
The RRA attempts to maintain a “normal distribution” of rankings, with the majority of states ranked in one of three middle categories.

Developments in recent months have led the RRA to lower its regulatory ranking of Arizona to its lowest ranking category, indicating a higher degree of regulatory risk for investors compared to other jurisdictions. At the same time, the RRA raised the rankings of the District of Columbia and North Carolina, noting that recent developments indicate that these jurisdictions are becoming relatively more constructive than they were previously from an investor perspective. 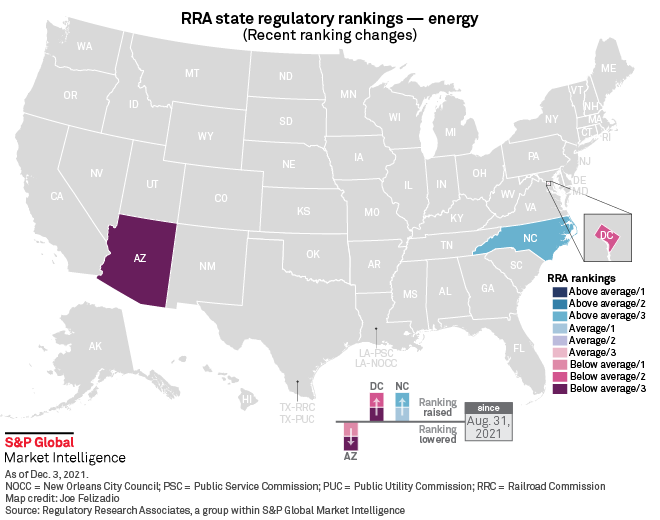 The RRA has also identified several state-level jurisdictions that may experience notable changes in the level of regulatory risk to investors in light of ongoing issues and proceedings in those jurisdictions.

As the District of Columbia’s Public Service Commission recently passed multi-year rate plans for the jurisdiction’s largest electric utility, some stakeholders have appealed the commission’s decisions, which could eventually lead to modification of this framework. In addition, there are several ongoing proceedings related to network modernization that are also worth watching and there has been turnover in the commission in recent months.

New Hampshire is also worth watching due to the high turnover of commissioners at the New Hampshire Public Utilities Commission and the relative inexperience of the current commissioner complement.

As Hurricane Ida made landfall on the Gulf Coast in August 2021, causing widespread service outages, the RRA is monitoring Louisiana, including the New Orleans City Council, which regulates the branch of Entergy Corp. Entergy New Orleans LLC, and Mississippi for regulatory action in response to upcoming utility restoration activities. Similarly, Texas is under continued scrutiny as regulators and policymakers implement regulatory construction changes to prevent the market disruptions that occurred during the February 2021 winter weather event. known as Winter Storm Uri.

In Pennsylvania, the ongoing tension between the Republican-controlled Senate and Governor Tom Wolf, a Democrat, is worth watching. The Senate has opposed moves by the governor to implement energy transition-related initiatives, such as joining the Regional Greenhouse Gas Initiative, without enabling legislation.

With the November 2 general election, Virginia saw a shift not only in the governor, but also in the governor’s political party, as Republican Glenn Youngkin defeated Democrat Terry McAuliffe. This change could lead to significant changes in the state’s approach to the ongoing energy transition.

Washington State is also worth watching as the Washington Utilities and Transportation Commission continues to explore alternatives to traditional cost-of-service pricing that may include performance metrics or goals, targets, incentives to performance and penalty mechanisms. 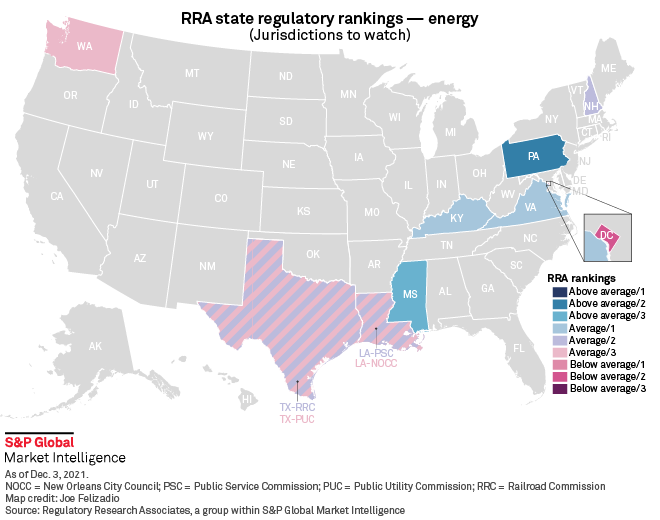 The energy sector in the United States is in the midst of a long period of transformative change, generally referred to as the energy transition.

Demands from public policy makers, regulators and customers to improve grid reliability and resilience in the face of more frequent weather events while transitioning from carbon-emitting generation and heating resources to renewable resources and/or zero-emission resources results in some assets being retired before the end of their expected lifespan, which can result in stranded costs.

While carbon-emitting generation assets are currently the most risky assets, as the industry framework evolves, other asset classes may face similar challenges.

For generation facilities owned by vertically integrated utilities, the management of stranded costs falls to regulators, and it is generally accepted that under the regulatory pact, the utility should be able to recover assets that have ended up stalled due to a change in public policy that occurred after the factories were built and in operation.

Regulators and state policymakers are using a variety of options to deal with stranded cost factory balances. The use of accelerated amortization, creation of regulatory assets, offsetting locked-in assets with existing regulatory liabilities, and securitization are some of the strategies employed.

Another issue that is increasingly emerging in the industry is how to deal with extraordinary costs related to weather and storms.

most utilities have provisions in their base rates for “standard” weather-related costs; they are generally estimates based on historical averages for varying periods. However, in recent years there have been more instances where actual storm-related costs have significantly exceeded baseline levels reflected in rates.

Some states have allowed utilities to include in rates an additional amount to fund a storm reserve that utilities can then tap for costs that exceed baseline levels. In other states, utilities, through incident-specific accounting orders or routine commission policy, are allowed to defer “extraordinary” storm costs for future recovery. Recovery is generally dealt with in tariff cases and is usually authorized over a relatively short period: five to seven years. Utilities are generally allowed to earn a return on the unamortized balance.

In cases where the amounts to be recovered are particularly large, utilities may be permitted to use securitization to fund deferred balances and even to replenish the storm reserve.

With utility disconnect moratoriums put in place as a result of the COVID-19 pandemic coming to an end for most, if not all, customers in most states, related cost recovery issues are beginning to arise. arise in tariff cases.

So far, the takeover hasn’t been particularly controversial. As expected, commissions generally allow for the recovery of any related deferral over a few years, with variable treatment with respect to the possibility of a return on the unamortized balance. However, in some cases, regulators are requiring companies to continue deferring some, if not all, of their COVID-19-related costs.