In Part I, we discussed the Taiwan Intellectual Property Court’s opinion on “selection of lead compound” and “motivation to modify a compound” in the case of Millennium Pharmaceuticals, Inc., Takeda Pharmaceuticals Taiwan ltd. vs. Chunghwa Compound Synthesis & Biotech Co., Ltd. (Taiwan IP Court 2021 MinZhuanSuZi No.19 Judgment). In Part II, we will dive deeper into review practices in Taiwan, the United States, Europe, and China.

Taiwan’s patent examination guidelines do not explicitly state the motivation for modifying a compound. Whether a compound involves inventive step/non-obviousness is primarily determined by structural similarity. If the claimed compound does not resemble the prior art compound, the claimed compound involves an inventive step. If the compounds are similar and have similar uses, in principle the claimed compound does not involve an inventive step unless it is proven to have unexpected effects. This standard is the same as in China. Regarding structural similarity, patent examination guidelines state that molecular structure alone cannot determine structural similarity between two compounds; other aspects such as technical field, suitability of structure and effect, scope of application should be taken into account.1

In Millennium Pharmaceuticals, Inc., Takeda Pharmaceuticals Taiwan Ltd. vs. Chunghwa Compound Synthesis & Biotech Co., Ltd. covered in Part I, the Taiwan Intellectual Property Court ruled that the selection of the lead compound should be similar in structure as well as pharmacological action. Hindsight bias is likely to occur if only structural similarity, but not pharmacological action, is considered. Furthermore, the judgment specifically stated that “compounds which are selected as lead compounds with reasonable motivation do not necessarily have the best effect”.

The United States values ​​the selection of lead compounds. In many U.S. patent invalidity cases, it was first considered whether a person of ordinary skill in the art (PHOSITA) was motivated to select the technical means disclosed by the invalidation applicant to be the lead compound2 . The Federal Circuit Court of Appeals (CAFC) has pointed out that, under normal circumstances, only “the compound with the most promising and useful properties” is considered a lead compound. A compound with known adverse effects (teaching)3 or a minimal structural difference from the claimed compound is not necessarily considered a main compound. When the compound selected by the invalidation applicant is not considered a lead compound, the compound in question must be accredited with an inventive step.

It should be noted that, to avoid hindsight bias in LCA, the prior art compound must have satisfactory properties for a PHOSITA to accurately select the compound as a starting point from the myriad of technical means disclosed in the LCA. prior art.

The CAFC criteria for the inventive step of chemical compounds in pharmaceutical patents are introduced in the following decision.

The patent in suit (US05006528A; patentee: Otsuka Pharmaceutical Co., Ltd.) relates to a compound called Aripiprazole, which is used to treat a variety of mental disorders.

Sandoz argued that a PHOSITA would be motivated to select 2,3-dichloropropoxy, unsubstituted butoxy, and prior art OPC-4392 as a starting point, illustrated sequentially as follows: 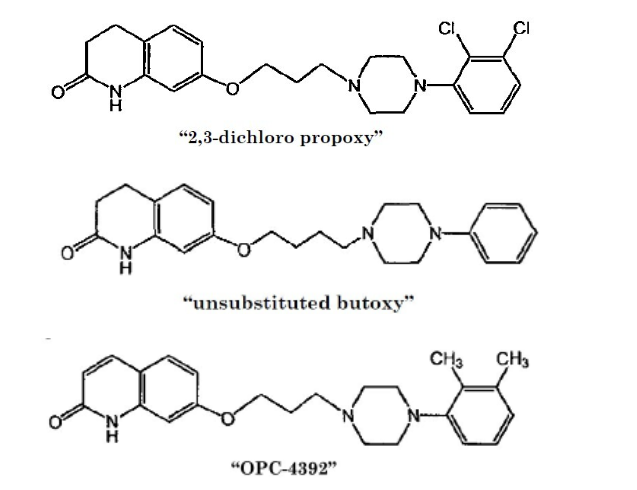 And by simple substitution or displacement, Aripiprazole is obtained. Sandoz claimed that the above compounds resemble aripiprazole, so a PHOSITA would be motivated to select them as the lead compound.

The opinion of the Court

The CAFC considered 2,3-dichloropropoxy to be only one of hundreds of compounds with central nervous system controlling action in the examples; although the prior art discloses mouse jump data of unsubstituted butoxy, four other compounds were significantly superior to unsubstituted butoxy. The literature also showed that the activity of OPC-4392 was not high and caused serious side effects such as visual hallucinations and illusions, thus, according to the teaching of the prior art, a PHOSITA would not have selected the above compounds as the lead compound.

Following the selection of the lead compound, whether there is motivation or teaching to modify a lead compound is also evaluated in the process. The motivation to modify must have a reasonable expectation of success, i.e. it is anticipated that the modification may improve the activity or correct known defects of an existing compound without sacrificing its benefits. Thus, the motivation to modify cannot be based simply on hypothetical or broad structural approximations, but on explicit scientific basis or experimental evidence.

The practice of Europe and China will be covered in Part III.

Can patient-reported results improve the selection of DMT for multiple sclerosis?

Selection of maintenance therapy and the importance of HRD testing in the management of ovarian cancer | Latest news for doctors, nurses and pharmacists